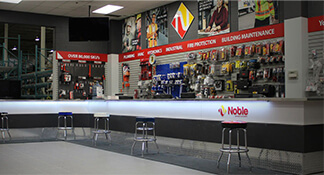 Since Noble Plumbing Supply and Trade Plumbing Supply merged to form Noble in 1997, the wholesale supplier of plumbing, HVAC, hydronics, industrial, building maintenance and fire protection products, has grown to more than 50 branches and counting, becoming the largest wholesaler in the greater Toronto area and one of the largest in all of Ontario. With recent expansion into both Quebec and British Columbia, Noble now has more than 200 delivery trucks and 24-hour service.

With growth came the need for a better proof of delivery (POD) system. The company also looked to automate its shipping and receiving process to streamline overall operations. They engaged Intermec by Honeywell and Nuway Software, a custom software solutions provider, to implement a new technology solution for improved signature capture and better shipping, receiving and scanning capabilities.

The solution? A custom software solution from Nuway Software coupled with the Intermec by Honeywell CN50 handheld mobile computer.

Under the previous system, Noble’s drivers would deliver products and customers would manually sign for the delivery. Under this paper-based system, a separate employee scanned delivery slips and loaded them into the company’s POD repository after the drivers returned at the end of the day. Often, slips were lost or damaged in the shuffle, and it was a lengthy, time-consuming process.

“With Noble’s rapid expansion, we looked to reduce the time-consuming manual process and began the project to implement a POD system for better signature success,” said Tod Querenqesser, Project Manager for Noble.

Querenqesser noted they also used the project as an opportunity to start streamlining their shipping and receiving operations.

“Previously, at the end of the day, the branch managers would look at all of the orders and move them into a shipped stage one-by-one so the orders could be invoiced. Across the 50+ branches, this was incredibly time-consuming for our branch managers,” said Querenqesser. “It took at least an hour per day and was something we knew we could automate for better accuracy.”

“Without a stable POD system, if a delivery was late or missing, we had to rely on the customer to call and let us know,” said Querenqesser. “We wanted to make sure we were committed to the customer service promise without relying on the customers to let us know when a mistake had been made.”

The company tasked Intermec by Honeywell and Nuway Software with developing a new technology solution that would meet these needs.

“After testing multiple hardware options and doing a comparison of products, everyone from our VP of Operations through to our delivery drivers unanimously chose the Intermec [by Honeywell] CN50,” said Querenqesser. “But beyond just a product, we wanted to work with a company we felt good working with, and we found that with Intermec [by Honeywell].”

For the software solution, they turned to Nuway Software.

“We had already been engaged with Nuway Software at this point, and knew that Intermec [by Honeywell] and Nuway had successfully done business together in the past; that gave us a level of comfort in working with both of them on a complete solution,” Querenqesser said.

Nuway Software developed a custom POD system for Noble that included both a driver application and a lightweight counter pick-up application.

Under the new system, drivers arrive each morning and turn on their CN50s to see which items to load on their truck. All of the items in Noble’s DC are barcoded, so drivers scan them with the CN50s as they load them onto the trucks. The system also tells drivers which stop to go to next but allows them the flexibility to change the order of delivery if they’d like.

Once they arrive at the customer location, customers sign on the CN50s and all of the information is transmitted directly back to the company’s servers in real time.

Querenqesser said the rollout had its challenges, as with any change, but that drivers were really happy overall with the CN50’s form factor and similar size and handling to a cell phone. Intermec by Honeywell engaged ViaScan, an Intermec by Honeywell Platinum Partner and systems integrator, to help with the deployment.

As a result of the new system, Noble has been incredibly pleased with the successful improvements they’ve seen.

“Since deploying, our proof of delivery success rate has improved from 80 percent to nearly 95 percent of all orders,” said Querenqesser. “The POD system has also allowed us to assist customers with delivery details and at the same time has provided a great deal of support to our invoicing cycle.”

Additionally, Querenqesser noted that the automation savings have also been a major benefit, including:

“This system has allowed us to refocus approximately 15 full-time staff on bettering our customer service rather than spending time on data entry,” Querenqesser said.

“The CN50’s GPS capabilities were yet another reason why it was the right choice for us,” said Querenqesser. “As we look to expand on the solution in the future, the flexibility to add GPS and routing applications will further streamline our customer service capabilities and better overall operations.”

Until then, Querenqesser noted it’s the time savings and better ability to focus on customer service that has them the most pleased with their technology investment.

“Between the improvements to scanning, shipping, calling and invoicing, this complete solution has allowed us the ability to offer better customer service to our customers, which at the end of the day, is our most important goal.”