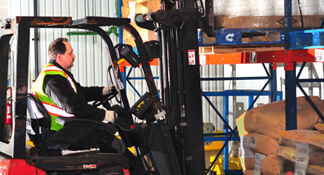 On the face of it, a large cold storage facility where equipment frosts over as readily as a Montreal windshield in January may seem an unlikely candidate for radio frequency (RF)–or even bar codes, come to that. How can you be sure RF devices will function when frozen, and what of such basic considerations as sticking bar-coded location markers to steel storage racks at minus 18 degrees Celsius? Where do you stick them anyway when you’re bulk stacking?

The people at Trenton Cold Storage Ltd.’s facilities in Trenton, ON, have solved all these problems and more. In fact they’ve done such a good job, it now looks as if RF is the only real choice for data transmission in cold storage, or in any other challenging environment.

Over the past 20 years, bar codes have become the product identification method of choice in warehouses and distribution centers. They’re easy to apply, read and may be used as carton and load identifiers, location markers, personal identity aids and more.

Collecting bar-coded data is one thing, but transmitting the information can be a problem. This is an area where RF has made enormous strides–so much so that it’s now the preferred method of bar code data communication.

Trenton approached bar codes for the usual array of benefits–to eliminate illegible handwritten scrawls, reduce delays and avoid plugging one device into another for data “uploads.” There are certain technical considerations with an RF installation, of course. Receivers and relays must be positioned at strategic points so there are no ‘blind’ spots, and there must be durable and reliable equipment in place, both to gather and process the bar-coded data.

Shipping Errors
At Trenton Cold Storage, the challenges were greater. With four facilities, Trenton services the frozen food industry, offering among other things, a national freight consolidation program. The facilities are hives of activity. Reefer trucks roll up to the loading docks and pull out again around the clock.

The busiest of them is the Glenburnie warehouse, which has four-and-a-half million cubic feet of frozen space, divided into three separate sections to hold a total of 30,000 pallet-loads. Two sections are racked. One of them reaches up to 35 feet. The third section is used for bulk stacking.

“This facility was started for storing and distributing local farmers’ crops,” explains Ian Miller, manager of MIS for Trenton Cold Storage. He says his mandate for five years was to bring RF into the warehouse.

“The bulk produce storage facility was the original reason for going to RF,” says Miller, who has 20 years experience in transportation and distribution. “We’d be dealing with 25 million pounds of product, mainly crops such as corn, peas and carrots, and as fast as it came in we would put it away as best we could, co-mingling different grades and lots and suppliers. When it came time to ship, the real problems began.

“Even if we managed to keep up with the paperwork, and the keying in, and being able to read the operators’ handwriting, and all in a timely manner, and even if everybody did their jobs as best they could, we’d still expect misplacements in excess of 20 percent. It led to us having to ship substitute product, or pay overtime to look for product, and the holding up of trucks and maybe a loss of confidence by our accounts. That was the core problem.”

Miller says real-time transactions are so important to Trenton because the company deals with food. Code dating and lot control can help determine what was shipped and where, in case there’s a product recall.

The trouble was, Miller couldn’t get the level of confidence he needed from the vendor community to ensure RF’s success in the harsh frozen environment. The steel frame and Styrofoam cladding of a freezer are not RF friendly, Miller learned, and it’s amazing how a tote full of peas will dampen radio signals!

Hardware was another problem. “Would the scanners work at minus 20 degrees Celsius? We didn’t want to unplug them and warm them up every two hours, or have to equip them with gel packs to fight condensation. We didn’t want to get into ‘fiddly’ management of the hardware.”

A visit to a frozen foods production plant where OCR Canada Ltd. of Markham, ON, had done a similar installation in even colder temperatures was enough to reassure Miller. The solution came in the form of Telxon spread- spectrum technology, with bar code scanners and printers. They form the backbone of a system designed and installed by OCR Canada about two years ago. It’s been running without a hitch ever since.

When pallet-loads of product arrive at one of the facility’s 14 loading docks, a Sato Model CL 608 printer produces a bar code licence plate–four to a load–which is applied right at the dock. These six-by-four-inch labels tell everything there is to know about the load, including the product, the manufacturer, when it was produced, received, the weight, and more. Trenton’s facilities are printing more than one-million labels annually using ten such printers.

Rugged Machines
After the bar codes are applied, fork lifts–either Raymond Easi-Reach or Dockstockers, Lansing reach trucks, counterbalance models, or trucks from Hyster and Baker–are used by workers who scan the codes and carry product to the storing location.

Eleven of the trucks are now fitted with Telxon PTC-870IM on-board computers, with another two to come. At storage, the rack bay is scanned by the operator. The actual storage level is scanned (not from the rack itself, but from an on- board menu). In double-deep storage, the software automatically allocates inventory to the further location.

Since produce in the bulk area is piled five to six pallet-loads or tote boxes deep, and about the same amount high, Miller chose an unlikely place to mount the fixed pallet-location markers. With no racks to work with, the only possible answer was the ceiling. But would it be possible to scan a code 25 feet up, through the Plexiglas of a lift truck cab enclosure?

OCR-supplied PSC laser guns, connected to the Telxon industrial-mount on- board computers seemed like the best way to go. The rugged machines permit keyboard entry and are ideal for rough environments. A specially-designed display screen ensures easy legibility, and even if the screen frosts over as the truck runs between the loading dock and cold storage, it can be wiped clean with a gloved hand.

Miller smiles as he recalls the first time a ceiling scan was tried. “A group of us watched the lift truck driver maneuver into position and point his gun at the ceiling. He nodded to us when he got the read as though it was the most natural thing in the world, and we let out a cheer.”

RF capability in the form of AIRONET’s spread-spectrum technology is an integral part of the computer. It provides real-time data communication and enables client/server applications and terminal emulation for IBM 3270/5250 and ANSI/VT220.

“The on-board computers give a full-screen of data. Any application that will run on any terminal will run on them,” Miller says. “Therefore, we were free to use the same software as before.” The guns have a wide depth of field since they’re also used to scan log-on badges at a distance of about 18 inches.

Unlike previous versions, current RF hardware has become so simple to set up, it’s virtually plug in and let it go, Miller remarks. He explains spread- spectrum RF technology is similar to cell phones, with each of eight antennae offering a local area cell cone. Each antenna is hard-wired back to the base station which is attached to the main computer, and the whole system is essentially an ethernet device that is TCP/IP-attached to a wide area network.

“In one case, our system is actually an Extranet node on the wide-area network of one of our clients. System access provides our accounts with great service and bypasses much of the interface between clients and customer service reps.”

On the transportation side, two major truckers build their load manifests on the system by cube/weight in conjunction with equipment availability for load consolidation purposes. Delivery terminals have access to the system for redistribution purposes, and clients can fax documents from the system to wherever they want.

“Our business is constantly being pushed to provide and deal with information that is accurate and right up to date. Only RF allows for immediate real-time updates.”

With those useful functions, Miller has no trouble with the price. “Cost justification was based entirely on anticipation of good inventory and location control. By initially concentrating on product relocation, we started to solve our problems right away, and our payback was almost immediate.”

Though Trenton doesn’t mis-ship enough to justify RF picking on its own, he doesn’t rule out future benefits. “Now that the system is installed, we’ll definitely take advantage of real-time picking, primarily for labor reporting and activity-based costing.”

There are two additional Telxon PTC-960 hand-held RF bar code scanners, used mainly by supervisors and in the pick lanes. A total of 41 people staff the facility. The high-rise racked area is fitted with double-deep drive-in racking. It serves mainly as a storage and a distribution facility for bread dough products manufactured in an independent facility, strategically located right next door.

Double-deep flow-through racks are planned for the other racked areas. They’ll hold finished goods such as processed foods for some of Trenton’s major logistics clients. The familiar orange pallets of the Canadian Pallet Council predominate at the center of the facility.

Getting Started
Miller says the biggest challenge with RF involves the actual bar codes. The company spent six to seven months prior to going live with RF, applying bar- coded location labels and setting up for the application of load labels. The problem of label adhesion at minus 20 degrees Celsius was solved when Miller visited 3M’s Web site, where he was able to source a supply.

For companies at the early stages of RF, he advises breaking the project down in stages. “Do the project in steps. You don’t have to define what it is you’re going to do in every stage. There’s no way you can anticipate how people will respond to your system or what flaws they’ll find in it.

“It’s a mistake to try and write up the whole system application to start with. You’ll end up with things like bar codes printed on the wrong side of a load or difficulty scanning codes through a lift truck mast — that kind of thing.”

Since all the clerical work is done by warehouse workers using RF and bar codes, their input was key to system design. They helped shape the layout of screen displays and develop an easy-to-view comparison check of receipts against the bill of lading, says Miller.

“Remember too, that operators can provide feedback to make changes and that the best practical ideas often come from the floor. If anything, our system was developed by the people who use it, and that’s the big reason why it works as well as it does.”