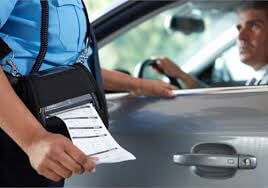 Challenge
The Oregon Department of Transportation‘s Governor’s Office of Highway Safety (ODOT) was established in 1969 to provide a safe, efficient transportation system that supports economic opportunity and livable communities for Oregonians. As part of its mission, ODOT is constantly researching innovative technology and the latest trends in transportation to help the organization continue to keep the roads safe for all citizens.

Previously, traffic citations were manually issued by the officer, who was required to write out a multi-part form. There were four colored copies of each citation, with a copy given to each party involved—the officer, violator, court and department of motor vehicles. Although each entity had the same information, the police department, court and motor vehicle bureau had to re-enter the data into their own computer systems before it went on the driver’s record.

Problems also occur when the driver can’t read the officer’s handwriting on the ticket. If the defendant cannot read the court date because the print is faded or not easily read, the defendant will fail to attend on the proper court date. The need to write slowly and press hard also increased the time it took for the officer to write each citation.

In addition, there were issues related to officers recording the wrong court date. Police officers—who work from their vehicles—didn’t always have a calendar at their disposal and sometimes wrote court dates on holidays when the court was closed. This would automatically result in a dismissal due to officer error.

Solution
According to Jeffrey D. Rubenstein, founder and CEO of APS, approximately 20 to 30 percent of all hand-written traffic citations are dismissed because of incorrect statute numbers, illegible handwriting and other administrative data errors. PocketCitation’s onboard intelligence solves these problems by ensuring that the citation information entered is correct and that the citation itself is printed in clear, legible type by Zebra RW 420 mobile printers.

“Using our PocketCitation application and Zebra’s high-performance mobile printers, law enforcement officers can issue a traffic citation in less than a minute. This capability can minimize risk and increase officer safety because they spend less time on the side of the road and in contact with traffic offenders,” says Rubenstein.

“APS PocketCitation was hands-down the best solution on the market compared with the other e-citation systems we evaluated. Now, our officers are safer because they can issue citations from behind the cover of their cars while maintaining a clear view of the violators’ vehicles,” says Vitolo. “Moreover, efficiency at traffic stops has greatly increased, tickets are more legible, and integration of data into existing systems has been hugely simplified, with no redundant data entry required.”

The APS PocketCitation application populates an agency’s current ticketing form (or newly designed form) with data from the violator’s driver’s license or returned from an officer’s query to the FBI’s National Crime Information Center (NCIC) or state motor vehicle bureau. The officer selects the applicable violation from a drop-down menu on the computer screen, and the appropriate statute number, fine amount, and court information are automatically entered on the ticket. The ticket is then printed out, clearly and legibly, using a compact, Bluetooth®-enabled Zebra RW 420 mobile printer. At the end of the shift, officers dock their handheld PDAs to upload the e-citation data into a centralized computer system, totally eliminating the extra step of manual data entry.

In addition to the APS PocketCitation software, ODOT is also using two additional solutions including the APS ReportBeamTM solution, a Web-based application that enables agencies to create an electronic version of any form/document and automate the mandatory processing associated with most agency paperwork (approvals, reporting, etc.), and the PocketCrash solution, an electronic crash form for a handheld device.

The PocketCitation solution is now fully implemented at four agencies under the Governor’s Office of Highway Safety Grant Projects. An additional four are being finalized, and at least seven other agencies are also using the system. Agencies now using APS solutions include the Oregon State Police, Clackamas County Sheriff ‘s Department, and a multitude of additional police departments and sheriff offices that are continually being added to the system. The Oregon DOT also purchased and is implementing the APS PocketCrashTM application for recording detailed information at motor vehicle crash scenes, which will also include Zebra printers.

“Feedback from public safety agencies to the Oregon Department of Transportation has been overwhelmingly positive,” Vitolo concludes. “Once officers discover the benefits of these automated solutions, they are more reluctant to give them up than they would be if someone were to ask for their car keys!”

With the new PocketCitation solution, ODOT is well positioned to continue its mission of providing a safe and efficient highway and motor vehicle transportation system for all Oregonians.