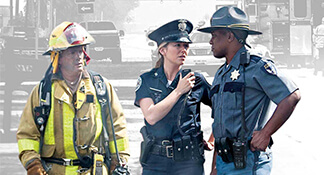 Situation:
The need for reliable, cost-effective connectivity with the state’s emergency response system
The eastern end of Michigan’s Upper Peninsula consists of three counties—Chippewa, Luce and Mackinac—that are home to a wide range of residents. The area boasts a variety of locations and lifestyles: the bustling port cities of Sault Ste. Marie and St. Ignace and numerous rural communities as well as the tourist mecca of Mackinac Island. This mix of urban, rural and seasonal populations combines with long, hard winters and an area of 3,486 square miles to create a challenging emergency response environment.

To improve operations across the region, the three counties agreed to centralize emergency dispatch operations. Because it possessed the newest network and equipment, Mackinac and Luce Counties agreed to contract with Chippewa County to create a leading-edge regional dispatch center. There were three main objectives: help reduce response time, improve efficiency and increase safety for residents of the region. There was one major challenge: to convince the state of Michigan that wireless connectivity to the Michigan Public Safety Communications System (MPSCS) would not only be affordable, but also reliable and secure. Complicating matters was a very aggressive timetable.

Solution: High-speed Motorola 4.9 GHz Point-to-Point wireless network
To accommodate additional call volume from the other two counties, Chippewa County needed to replace its existing dispatch system with a solution that delivered more bandwidth. The county explored a number of different technology alternatives for building the new network. Traditionally, Michigan dispatch operations have used licensed microwave-based solutions for data transport. But traditional licensed microwave networks can cost tens of thousands of dollars per link, well beyond the project’s budget. Another possibility was leasing T1 lines from telephone providers, but T1 lines have their own issues. One is cost; monthly recurring lease costs can run from $300 to $1,300 per month per line. Other problems include reliability, lack of availability of T1s due to the remoteness of the desired location, the timing of deployment and loss of control due to dependence on an outside supplier.

Ultimately, Chippewa County selected a Motorola PTP 49600 wireless Ethernet bridge, utilizing the 4.9 GHz licensed public safety spectrum. The system consists of an MCC 7500 series console and a 4.9 GHz Point-to-Point wireless Ethernet bridge for connectivity to a gateway to the MPSCS network. The MPSCS is located approximately 15 miles from Chippewa County and the link must traverse significant obstructions in the way of trees and foliage.

Result: Enhanced effectiveness of emergency dispatch service accomplished with outstanding cost efficiency
The new dispatch network was ordered, shipped, staged, installed and implemented in a matter of weeks. Because of the hazardous cold of long Upper Peninsula winters, the decision was made to install an antenna on a tower but to locate the radio inside a building at the base of the tower. This precluded the need for workmen to climb the tower to repair the radio when it’s 30° F below zero or in the midst of a blizzard. With the help of Motorola’s PTP LINKPlanner tool, engineers were able to design the path to prevent signal degradation due to the interior radio location.

To the counties’ delight, the system became operational in advance of the target date, on the day after Thanksgiving. Results have been outstanding, with the system seamlessly handling the increased call volume of approximately 200 calls per 24-hour period. Even more important, the response has been swifter, service has been more effective and public safety has been enhanced.

Convincing the state
As a provider of the MPSCS public safety communications network, the state of Michigan, accustomed to working with licensed microwave, was initially concerned about the use of an IP-based network to connect to its system. “Local communities were interested in the use of wireless as a much less expensive way of connecting to our state backbone network,” says Theron Shinew, deputy director, MPSCS. “At first, we had some security and reliability concerns.” State officials wanted to make sure the counties’ network would not harm the statewide system in any way. They wanted assurance that the IP system would not infect the MPSCS network with viruses, that it would not be vulnerable to network intrusions and that it offered advanced encryption standards to ensure communications privacy.

To validate the performance of PTP radios prior to actual deployment, MPSCS tested a wireless underbuild system. (A wireless “underbuild“ is a solution that cost-effectively adds capacity to a licensed microwave network using existing towers and cabling.) “We ran a month-long pilot program using a wireless PTP 6 GHz link underbuild solution,” states Shinew, “The network performed flawlessly and so we approved the use of Chippewa County’s wireless PTP solution.” The regional dispatch center system was successfully deployed and is providing exceptional performance, security, connectivity and ROI.

IP-based future
Chippewa, Mackinac and Luce Counties, as well as the MPSCS, are enthusiastic about the new regional network’s performance. They’re also impressed by the significant cost savings it delivers, especially in contrast to other licensed microwave and T1 connectivity options. The success of Chippewa County’s combined dispatch center is paving the way for increased future usage of IP-based solutions for T1 replacement and last mile connectivity.