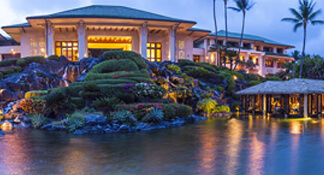 Due to an outdated communications infrastructure and inefficient public and guestroom Wi-Fi access, the Grand Hyatt Kauai’s guest satisfaction ratings were dropping.

Although one of Hyatt’s showcase resort properties, the Grand Hyatt Kauai Resort & Spa was struggling with low guest satisfaction scores in its high-speed Internet service. The property’s outdated frame relay and microwave system was constantly going down during heavy rainstorms, requiring numerous resources—including helicopter service—and up to two weeks to fix problems. In addition, Wi-Fi service in guest rooms was slow, inconsistent, and unreliable, especially during high occupancy periods like the holiday season.

Working with a new service provider and using Zebra technology, the Grand Hyatt Kauai successfully completed the upgrade before the upcoming holiday season.

With the new Wi-Fi system in place, the Grand Hyatt experienced immediate improvements in satisfaction ratings.

As soon as the system went live, the resort began seeing significant improvements in guest communications satisfaction scores as well as overall satisfaction ratings. The system is providing exceptional reliability and speed, delivering up to 200 Mbps across the entire property. In just a few months, the property has risen from near the bottom to the top 10 in Hyatt’s internal property satisfaction rankings, including being number one in North America. In addition to guestroom service, improved network performance in meeting rooms and public spaces is helping the Grand Hyatt Kauai attract important new corporate business.

HAWAII 2.0
The Grand Hyatt Kauai Resort & Spa is situated on 52 lush acres at Poipu Beach on the spectacular southern end of Kauai. With 602 luxurious rooms, a quarter mile of stunning beach, a championship golf course, 65,000 square feet of flexible meeting space, a 45,000 square foot spa, lagoons for kayaking and a full array of international quality restaurants, the Grand Hyatt is one of the Hawaiian Islands’ premier destinations.

When over the last few years guest satisfaction ratings began to fall, a new IT Manager, Lydia Villanueva, was brought on board. There wasn’t much of a mystery as to why scores were dropping so dramatically; most of the problems concerned the property’s communications and Wi-Fi access service. “Our existing communications infrastructure was old, and consisted of three generations of hardware, much of which was archaic and corroded,” Villanueva explains.

One recurring issue was that maximum spikes in usage—usually occurring during holidays and other peak-occupation periods—caused the system to lock up and the network to go down completely. To put an end to this erosion of customer service and satisfaction, the resort needed to upgrade and deploy next generation communications and Wi-Fi networks.

Reliability was a major problem. “Our Internet connectivity solution was a microwave radio on the roof of the hotel connecting with a dish on top of a mountain,” says Villanueva. Because microwave technology traditionally has problems in wet weather, the island’s tradewind showers were an ongoing connectivity challenge. The remote mountaintop location required a helicopter to access the dish to repair and service the equipment, generator and batteries. That could, and often did, take hours—a whole 24 hours during one event—leaving the resort with slow or non-existent Wi-Fi service and very unsatisfied guests.

“These outages caused lots of complaints about the ineffectiveness of our Internet service,” notes Villanueva. To help soothe frustrated guests, the resort regularly compensated guests for the spotty service. At the same time, it did whatever it could to provide at least a modicum of access. “We did every workaround we could think of; for example, our engineers added portable APs in every room,” recalls Villanueva. “We set up a makeshift Internet cafe with wired access in the ballroom and made it available to every guest—VIP guests were provided with AirCards—which was a difficult and costly effort.” The connectivity issues also threatened to cause loss of corporate, meeting, and event business.

But even as satisfaction scores were declining, there was something of a silver lining. “Underneath it all,” admits Villanueva, “I knew that this was additional justification and motivation for getting rid of our outdated infrastructure. Early in the year , the executive committee said, ‘Lydia, just do what it takes to get this fixed.’”

“That gave me the green light,” says Villanueva. She immediately began working with her regional IT director to do system walk-throughs and look at new options. “One priority was that we wanted a partner who was local, or at least island-wide, that could support the new infrastructure,” says Villanueva. The Grand Hyatt Kauai turned to Pacific DirectConnect (PDC), a systems integrator based in Honolulu and offering years of experience working in Hawaii, as well as a history of teaming with Zebra and its powerful, reliable wireless network technology.

“We’ve got low guest satisfaction scores. Fix it.” The directive that Mike Browning, president, PDC was given by the Grand Hyatt Resort and Spa was clear, if not simple. “The Grand Hyatt Kauai’s team was very aware that their Internet problems were holding them back,” says Browning. “They knew that had to stop.” PDC provided the resort with a complete high-speed integrated system solution. At the same time, the IT department eliminated the outdated microwave system and migrated to a fiber optic infrastructure. Contracts were signed in the late spring, and the target was to get the new system up and functioning by the all-important holiday season.

There were two phases of the project. The first step was upgrading the resort’s aging infrastructure; next was the deployment of a new wireless network to bring reliable, high-speed connectivity to the entire property. “The Grand Hyatt Kauai presented significant challenges for wireless deployment,” Browning explains. “First, there was the state of the existing system infrastructure, second there was the sheer size of the property, and third, the way the buildings were laid out, hallway guestroom deployments wouldn’t work.”

The objective of the new wireless system was no less than to provide mobile high-speed Wi-Fi access anyplace a guest could walk, swim, swing, serve, or kayak. The system had to provide high-speed WLAN coverage from beachside to pool; to restaurants and bars; to golf clubhouse and tennis courts; to the spa and to meeting spaces, retail, and all public areas. The project also included back office networking for administrative use. The networks make use of both 5 GHz and 2.4 GHz frequencies. “We built the public space network using 5 GHz so it wouldn’t interfere with the guest 2.4 network,” notes Browning.

The resort installed a Zebra-based wireless local area network that enabled the IT team to both manage budget and meet expectations. To provide the high-speed connectivity today’s laptops, tablets and smartphones demand, the team installed microcell technology in the form of Zebra’s 6511 access points (APs) in one out of every three rooms. Other rooms were fitted with Zebra’s 6510 wall plates. This innovative product provides three Ethernet ports, one for Internet connectivity, one for voice, and one for future video and entertainment use. “All of these talk back to the RFS 7000 controller to facilitate more efficient network operations,” says Browning.

Property-wide outdoor connectivity was accomplished using three 7161 APs, one beachside, one poolside and one at the spa. Wi-Fi service was assured in other public spaces using a number of Zebra 622 APs in locations including the lobby, concierge, and registration areas—for web check in and check out—restaurants and retail. Notes Villanueva, “At our Sea View Terrace, with its expansive views of the ocean, it’s common to see people reading their e-books, streaming music or working on their laptops or tablets while enjoying the sea breezes, the sunshine and gourmet coffee.”

“Zebra service was a breath of fresh air,” notes Browning. When the resort requested further technical assistance from Zebra, they responded quickly and effectively. “At one point, Zebra sent in a three-person team, including engineers,” continues Browning. “They stayed with us until everything was working to our satisfaction.”

Meeting spaces were another priority. As with most resorts, the quality of meeting facilities and communications is crucial to attracting, and keeping, large businesses, associations and other groups and organizations searching for event venues. Over the past few years, slow, unreliable connectivity and the inability to meet stringent technical requirements, was increasingly becoming an issue for many current and potential meeting and event customers. With almost 65,000 square feet of meeting space to fill, that had to change quickly, and it did. “There are 40,000 square feet of outdoor space and another 24,000 square feet of indoor space,” says Browning, “all of which are now covered by Zebra high speed wireless technology.” The resort can now offer meeting spaces with high-speed broadband networks customized for each group’s requirements. The wireless network upgrades are helping the resort attract new meeting and event business, including from organizations that have demanding technical requirements.

The project was designed to provide efficient connectivity across multiple communications platforms including Wi-Fi-enabled devices and fully protected access to the Hyatt Network. This will include stringent PCI compliance and mobile POS applications to enhance service in the resort’s restaurant, bar and retail applications. The system also supports the resort’s communications business plan, which offers basic 1.5 Mbps access—e-mail, Web surfing— as part of the resort fee. In addition, a premium service is available for an additional fee, offering up to 10 Mbps speeds that enable applications such as Skype and NetFlix streaming video.

The project became operational in November, just six months after the contracts were signed, and well before the targeted holiday season. The numbers have been exceptional from the very start. Typically, the resort has 1,200 to 1,400 devices online everyday, with aggregate throughputs of 100 to 120 Mbps. The total property has approximately 200 Mbps.

Results have been both instantaneous and gratifying. “Customer satisfaction scores improved as soon as we went live, and our overall satisfaction ranking has also skyrocketed,” says Villanueva. “Soon after going live, we were excited to get our first ‘10’ rating ever. Now we get them all the time.” Hyatt corporate rankings confirm the system’s success. “We went from near the bottom for Internet connectivity satisfaction to the top 10 in a very short period of time,” Villanueva notes, “including being number one in customer satisfaction in Hyatt’s North American operations.”

The resort has a number of ideas for further leveraging the new wireless network. The property has 11 restaurants and more than 15 retail establishments. “Probably next on our agenda is a mobile POS system,” says Villanueva looking to the future. “With manual systems, service can be slow at poolside or on some of our terrace restaurants. When a server has to take many orders, then physically run them back to the kitchen,” explains Villanueva, “it can take up to a half hour for guests to receive their drink or food orders.” The ability to use handheld wireless devices to transmit orders as soon as they are taken can dramatically improve service and eliminate complaints.

The Grand Hyatt Kauai’s new infrastructure and wireless communications are not only improving guest and meeting planner satisfaction scores, they are also becoming a major differentiator in Kauai’s ultra-competitive hospitality marketplace. Notes Villanueva, “Other competitors on the island are still making do with speeds as low as 20 Mbps, compared to our overall 200 Mbps.” After years of struggling along with unreliable, slow communications performance and wrestling with low customer satisfaction ratings, the Grand Hyatt Kauai Resort & Spa has, in less than a year, emerged as Number One in their overall customer satisfaction scores for Hyatt’s North American operations. “I really feel confident,” Villanueva sums up, “that our Zebra network is a solid and intelligent system we can continue growing with.”