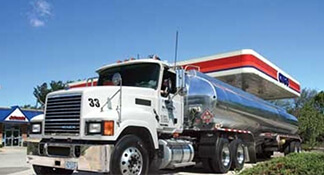 McMahon Cartage is a gasoline hauling and delivery company that services gas stations and trucking companies in the Chicago area. It employs 32 drivers to deliver approximately 5. 5 million gallons of gas a week to more than 300 gas stations.

Three years ago, McMahon Cartage determined that its delivery system was inefficient and decided to streamline the process. “In the old system, a gas station owner called the distributor; then the distributor called us and we entered the load into the system; finally, we called the driver to give him the information,” John McMahon, vice president of McMahon Cartage, explains. “Each delivery had to go through four people before it made it to the driver. As a result, there was a lot of miscommunication and wasted time. ”

“Because we had so many steps in the process,” McMahon continues, “there were more chances of making mistakes. Plus, we had no way to track our orders. If something went wrong, everyone was pointing fingers at someone else. ”

In addition to the lack of accountability, drivers often got lost on their routes or wrote down the wrong name of the gas station on their order, resulting in the driver being held responsible for the billing inaccuracy, which could mean as much as $30,000 taken out of his or her paycheck.

“I spent a lot of time organizing the drivers’ schedules. In order to keep route errors down, I placed drivers only on routes that were familiar to them,” notes McMahon. “I wanted to ensure that our drivers could focus on driving safely to their destinations instead of having to worry about looking down at a map or getting lost. ”

So, the company began searching for a solution that would track orders more efficiently and make deliveries faster, as well as minimize the time customers spent placing orders.

McMahon Cartage selected an integrator of wireless, barcode, and mobile solutions, to establish an online ordering system for scheduling delivery to gas stations. With Digital Fuel Solutions, the Web-based program developed by McMahon Carthage, delivery process time has been cut in half by allowing customers and distributors to order their gas online. The online orders are then given directly to the drivers via a Motorola® handheld device. After the driver delivers the gasoline, he prints a receipt using a Zebra® printer, eliminating errors and illegible writing.

“After completing a lot of research, we decided the Motorola handheld and the Zebra RW 420™ printer formed the best application for the job,” says McMahon. “The easiest part of the whole project was integrating the Motorola handheld and the Zebra printer with my software application. Plus, it only took the drivers two hours to learn the system. ” As the only mobile printer to meet the stringent IP54 dust and water resistance rating, the RW 420 can withstand the harsh demands of a number of route accounting and field service printing applications, including invoices, delivery receipts, service estimates, sales orders, and inventory management. “The primary feature we wanted in the mobile printer was the ability to sustain extreme cold and hot weather because of the varying Chicago climate. We also required mobility because there was nowhere to put wires in the truck. Finally, we needed durability because the truck bounces quite a bit,” states McMahon. “The Zebra printer was the perfect fit and I’m very happy with it. ”

McMahon continues, “Our drivers love the Zebra printer because it saves them time and is virtually error-free. The problems with the old system that occurred when a driver wrote down the wrong delivery information have been completely eliminated with the printed receipt. The drivers also comment on how surprised they are that the receipt’s image never smudges, even if it is folded in half. ”

The Motorola PDA features a number of applications that save McMahon Cartage time and help drivers better navigate their routes. Drivers use several applications such as Google Maps to quickly direct them to their destination, and the Weather application to get the daily forecast for driving conditions. Two favorite applications for drivers include the Dollar Sign, which gives drivers a running total of their pay for each delivery and a Mobile Alert application, which notifies drivers of special circumstances that may arise on the route.

“Overall, the drivers love the new system and applications. The coolest application is the Mobile Alert. It pops up for each account and gives a safety warning to the driver. In the past, I had one station where the drivers knocked down three telephone poles. So, one of my alerts reminds the driver to ‘Please watch out for the pole’,” explains McMahon. “In addition, distributors request to add Mobile Alerts such as ‘Make sure you see the customer before you drop off the fuel’, etc. It’s a huge plus for everyone. ”

With the Google Maps and Mobile Alert applications, McMahon is able to simplify scheduling. He no longer has to match drivers to particular terminals and stations by virtue of the alert and directions. He notes, “You can send anyone anywhere and be comfortable that they will find their way and know all the special delivery alerts. The system is much more efficient because we can now schedule based on geography. In addition, the drivers’ paperwork is 80 percent faster—a huge plus for drivers, who can spend more time concentrating on driving than doing paperwork. ”

“Since I implemented the new system, we’ve seen a ton of benefits,” comments McMahon. “One distributor, World Fuels, has praised the system, saying it has significantly improved the company’s billing process because the Zebra printouts are much clearer and there is never an error in reporting. Plus it takes World Fuels about 16 seconds to order its gas online, which has saved them approximately 42 man-hours per month on one entry. ”

Digital Fuel Solutions also does forecasting for McMahon’s customers. With record gas prices earlier this year, it was a huge help to better forecast how much gas to sell. McMahon notes, “This is inventory at its best. ”

In addition, McMahon’s payroll and customer billing is done 93 percent faster. “It used to take me close to two days to complete payroll. Now, it’s taking me around 12 minutes. With 100 percent accuracy,” said McMahon.

“The system also has brought us significant safety benefits. For example, if a truck has a flat tire or something is wrong, we’re able to eliminate it from the route with the push of a button. This prevents other drivers from accidentally using the truck,” said McMahon.

The new delivery system quickly yielded significant business benefits and cost savings for McMahon Cartage. However, the company gained the most impressive cost efficiencies via a reduction in shifts. With the new system, McMahon Cartage was able to eliminate a whole shift, resulting in savings of $3,500 per week and a 55 percent reduction in the number of dispatchers. With its mobile delivery system, the company is operating more efficiently than ever.