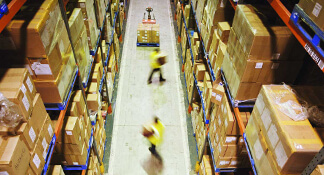 The Challenge
After considering the use of a barcode system for many years, Hilti finally decided to take the plunge when the company introduced its new business system, SAP. Though there were many reasons for investing in this system, Lasse Liffner, Hilti’s service manager, stated, “the primary reason we wanted to introduce barcode technology is for the high level of accuracy, which is vital to our business.”

Barcode technology was the right answer for Hilti due to the sheer volume of service repairs the company completes annually. Hilti performs about 30,000 services/repairs per year and the entire repair process from receipt of a complaint to customer delivery generally takes only three days. Therefore, it was critical for Hilti to utilize a bar code system that was capable of handling their fast pace and improve their processes.

The Solution
Hilti chose a Datalogic solution consisting of bar code readers and mobile computers. The barcode system would be used in the service center, where the system would track the product through its different phases of repair. They selected Datalogic scanning’s Powerscan PM8300 reader for its cordless capabilities and its display which indicates a Good Read confirmation. Lasse stated, “We also chose this particular scanner because of its durability. It is at home in rugged environments and has even fallen to the floor many times without breaking.”

After installation, Hilti implemented a new process utilizing their barcode system. When customers call and report problems to the customer service department, a log is created in the business system. A shipping request with a transport company is automatically initiated and a label is faxed to the customer. The customer prints the label and attaches it to the box with the damaged product. When the box is received by Hilti, the product
is scanned by the Powerscan PM8300 reader to verify the serial number for the product’s warranty status. A new barcode is printed with the information about the customer and attached to the box before being sent to Hilti’s Service Department.

At the Service Department, a service technician scans the bar code to obtain information about the repair. During the product repair, each part is scanned to decrease inventory errors and update the inventory record for parts. Orlando, a repair worker said, “the reporting of spare parts is much quicker. Before the new system was installed, we had to manually count and write down all spare parts, which was not always error-free.” The order and a basic invoice are also created through this process.

The Results
Hilti’s new system has made a visible impact in time saved and the number of resources used. For example, paper usage and labor have been cut in half. According to Jörgen Olsson, “receiving service orders goes remarkably faster. We save about a half day of work each day with the new barcode system.”

Employees are able to use their skills more efficiently through the ease of many processes. Anders Andersson, a warehouse employee, states, “I used to write down all of the article and serial numbers for an order by hand and then key them into the computer manually. It was very time consuming and easy to make an input error.” Thomas Isaksson, the warehouse manager, agrees. “We deliver approximately 45,000 machines each year and to save seconds on each order quickly adds up. Picking errors have also ceased to exist, which provides even higher quality of delivery to the customer.”

To sum up the benefits of this new system, Lasse Liffner stated, “our customers receive their repaired machines back so quickly, that they barely notice that they have been gone. One customer called to scold us for not having picked up a broken machine, but when he realized the machine had already been picked up, repaired and returned, he was very impressed with our service!”