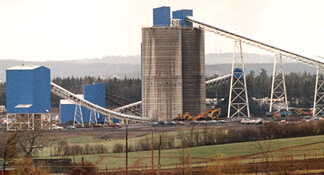 You can almost set your clock by them. Early every morning, fishing boats put to sea across the broad expanses of Sydney Harbor on the east side of Cape Breton Island, in the Canadian province of Nova Scotia. Meanwhile, 700 feet down under the harbor’s floor, men and machines head to work on the day shift in an orderly maze of mine tunnels dug into the seabed’s rich coal deposits.

The Cape Breton Development Corp. (CBDC), headquartered in the town of Glace Bay, Nova Scotia, operates two mines on opposite shores of the harbor. Phalen Colliery and Prince Colliery (“colliery” is a British term for coal mine) are both submarine mines, each with its entrance on dry ground, each with a main shaft that descends into thousands of yards under the cold waters of the Atlantic.

These mines represent long-term projects. According to Ken Garland, director of information services for the CBDC, each mine will be productive for ten to 15 years, yielding a combined annual output of roughly 3.5 million metric tons of coal. CBDC uses a technique called “long wall” mining, which incorporates main tunnels that are driven out under the sea for thousands of yards. Then, like a side street three kilometers long, a tunnel is dug off a right angle from the main tunnel. Next, another “side street,” 800 feet farther down the main tunnel from the first, is bored, parallel to the first and of the same three-kilometer length. A cross tunnel is then created that connects the end of these two side streets at their ends; this cross tunnel creates an 800 foot “face” of coal from which the real mining is accomplished. Once a face has been exhausted, a new one is opened up farther down the main tunnel.

Huge machines called shearers work up and down each face, chewing off the coal, which falls on a conveyor. A series of connected conveyers takes the coal to a silo on the surface. “There are roughly 1.5 million tons of coal extracted from each wall, and it takes about a year to mine out a single wall,” explained Garland, “and while that’s going on, we’re developing new levels [for future use].”

Production is maximized by running the mines around the clock, three shifts a day. In addition to the two mines, CBDC maintains a coal preparation plant, a dedicated railway for moving the coal, and a central maintenance facility. At the Phalen Colliery, there are roughly 900 peopled employed, spread out over three shifts, while at the Prince Colliery, 600 workers are on the job. A work force on that size requires a reliable time and attendance system, but there is another, more basic reason why it’s important to know precisely who is down in the mine.

Though modern mining technology has removed some of the life-threatening danger from the industry, there is still the ever-present risk of a cave-in, and CBDC takes the task of time and attendance very seriously. “We need to be very comfortable with knowing which miners are underground-for safety reasons,” said Garland. “In case there was any kind of a problem, we need to have a reliable indication of who’s there and who isn’t.”

In 1994, CBDC contacted OCR Ltd., a systems integration firm based in Markham, Ontario, and explored the feasibility of replacing the company’s traditional time and attendance system with an automated installation. Following a site survey and an exhaustive review of CBDC’s date requirements, OCR put together a bar code-based package that would not only speed up the company’s T&A activities, but would also provide virtually flawless information.

CBDC’s goal was to establish automated data collection (ADC) capability and key recording points, and funnel date collected from these locations back to their host computer, a Hewlett-Packard 3000 located in their Glace Bay headquarters building. The 3000 is served by a wide area network that connects the five main installations (mines, processing plant, rail head, and maintenance shop), the farthest of which is roughly 40 miles from the main office. At each installation is a PC that anchors the data management activities at the site, including the gathering of T&A information.

How It All Works
Bar code is the element that enables the new system to function so flawlessly. Each miner is issued a badge with a unique bar code printed on it. Written in Code 39, the bar code corresponds to an employee file maintained on the corporation’s human resources database, which resides on the host computer. Once the badge is issued, it becomes possible to record when and where the employee logs in or logs out, using one of many bar code readers distributed throughout the five sites. There are two types of readers: slot and laser. The laser units are Metrologic Tech 7 omnidirectional scanners, each enclosed in a NEMA-approved case that protects it from coal dust. Attached to each scanner is a Linx III-1 data terminal equipped with a 2-inch LED display. Transactions are simple. For instance, when miners punch in for their shift, they remove their badge from a rack next to the reader, pass it in front of the reader, and then place it in another rack; to punch out the process it simply reversed. (There is a reader for “inbound” workers and another for those who are badging out.) As each badge is scanned, the Linx terminal immediately displays the miner’s badge number, his or her check number (used for internal tracking), and time of log-in or log-out.

“The devices are well accepted by the miners,” noted Garland, “and they are very fast. At a shift changes, we could have as many as 300 miners coming up out of the coal mine, and we can badge them through in a matter of minutes.” In addition to the noncontact scanners the miners use, there are also slot-type scanners for use by personnel who do not actually work below ground. These, too, are attached to Linx III-1 units.

At each location, all of the readers are connected on a local area network to the site’s PC. On a nearly continuous basis, the PC polls each of the terminals, picking up any new data. Running on a Linx-developed communications program, the PC handles all network management functions, including time set, program and file download, file directory lookup, file deletion, and graphical terminal status display. Once the data has been properly formatted, the PC automatically uploads it to the host computer back at headquarters.

CBDC prints its own badges. Utilizing the Loftware Label Manager software package, the badges are generated on a standard Hewlett-Packard Laserjet printer. After being printed, each badge is laminated in red, a precaution against copying. In addition to the bar code and check number, the badge also carries a sequence number that allows the host computer to track which issue the badge is. For instance, if a badge is reported lost or destroyed, a new one is issued to replace it. Should the old badge show up at a later date, the system would be able to flag it, due to its outdated issue number.

CBDC primarily uses pre-rostering to manage its payroll. “The schedules of the miners are very predictable, in terms of work crews and job assignments,” explained Garland. “We are able to anticipate who is scheduled to work, in what part of the mine, on what shift, and on what days of the week. We attempt to put as much of this reporting for attendance and payroll purposes on an exception- mode basis.

“We have in the system a small window of time when that employee should be badging in or out,” he continued. As long as he or she scans in and out within that window of time, the payroll transaction is automatically generated and the hours are assigned according to the particular section and job he or she is working on. Anything that doesn’t quite conform to that schedule, for instance an early badge-in, generates an exception report.” A copy of this report is forwarded to the employee’s supervisor for follow-up activity.

To date, the new T&A system has been living up to CBDC’s expectations. “The system is very accurate,” claimed Garland. “We know that date is good. We’ve had not significant failure in the three years that it has been installed.” Another plus of the new installation is its ability to bounce back from a power failure, he noted: “The badge reading terminals buffer a fair amount of data, and that information is transferred to the PC and stored in a file. The PC talks to the HP 3000 every minute, so wherever we’ve had a network problem or power failure, we haven’t lost any data. When the system comes back up, everything reconnects, and everything goes where it’s supposed to go.”

Down in the mines, beneath the waters of Sydney Harbor, the system of beams and supports in each tunnel is a sober reminder that coal mining is a cautious business. No one is more aware of this than the miner himself, and punching in and out of the mine is taken seriously. “They treat those badges and readers with a lot of respect,” said Garland. “It’s kind of sacred, and no one monkeys around with them.”