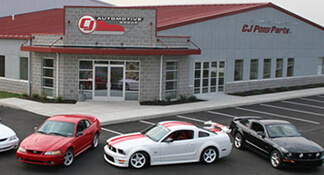 CJ Pony Parts is one of the oldest Mustang parts retailers in the world. Founded in 1985 by two friends
with a passion for classic Ford Mustangs, the company began by stocking and selling parts for every
Mustang model since the Pony Car was introduced in 1964. Today CJ Pony Parts provides the widest
selection of OEM, NOS and aftermarket products available – ensuring customers can transform their
Mustang, Focus ST, Fiesta ST, Bronco F-150, Chevy truck, Dodge truck or Toyota truck into their dream
vehicle.

With more than 63,000 square feet of warehouse space across three facilities in Pennsylvania and a new,
fourth Las Vegas warehouse, CJ Pony Parts houses more than 50,000 parts and accessories.
Patrick Jester, Director of Technology for CJ Pony Parts, points out that the company is growing at a rapid
rate. The expansion of their business prompted CJ Pony Parts to update their inventory asset control
and fulfillment operation. Specifically, they needed new barcode scanning technology that was easier to
use and provided better network connectivity. The older devices negatively impacted productivity and
customer satisfaction. Lapsing support for Windows CE 5.0 made it even more critical to deploy a nextgeneration
device.

“Our legacy devices became a challenge and we sought a newer and more intuitive rugged mobile
computer to improve productivity within our warehouses,” said Jester. “We researched the market
thoroughly and called Barcodes to arrange a trial of several mobile computers from different
manufacturers.”

OCR Canada has a relationship with CJ’s and understands their business challenges. “We had previously worked with CJ Pony Parts to provide printing labels and mobile computing solutions for their forklifts. Understanding their needs allowed us to quickly recommend the best most computers for their supply chain operations,” said Tom Zielinski, Account Manager for OCR Canada.

After trialing multiple devices within their facilities, CJ Pony Parts selected Janam’s XT2 rugged touch computer to provide visibility across its warehouse operations. They were attracted to its smartphone-like design and robust feature set. At only 10 ounces, the XT2 is smaller, lighter and faster than other rugged mobile computers in its class, and CJ Pony Part immediately recognized the value in its lightweight and rugged form factor. In addition, the familiar and intuitive Android OS helped to reduce training time for CJ Pony’s employees.

Tom Zielinski added, “Lightning-fast wireless connectivity and the ability to customize the user interface was important to the CJ Pony Parts team. The XT2’s attractive pricing then sealed the deal.”

CJ’s research and extensive testing of devices paid off. With 60 XT2 mobile computers deployed throughout their four warehouses, the devices have been quickly adopted by their workforce. Employees can now work smarter and more efficiently and the improved network performance ensures information can be accessed and shared in real-time.

“After thorough testing, we found that nothing compares to the XT2 in terms of performance and reliability,” added Jester. “We’re light-years ahead of where we were a short time ago. With the new XT2s, we are seeing a tremendous increase in productivity and improved customer service.”