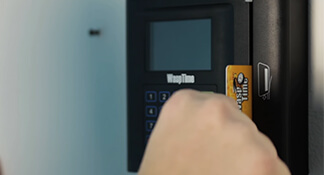 A time-tracking nightmare, for employees and management
Afton Manufacturing creates a wide range of metal products for larger companies in the oil field, air hose, exercise and crane block industries. The company’s 14 employees work in overlapping shifts, with some occasionally putting in up to 12 hours a day.

For years, the company used a traditional, mechanical punch clock to track employees’ time. Each worker would punch a paper timecard at the beginning and end of his shift, as well as for his lunch break. Employees also received a company-scheduled 10-minute break each morning and afternoon; however, they were not required to punch their timecards when taking off this small amount of time.

“As time went on, breaks were getting longer and longer. Our employees had a tendency to stretch out breaks sometimes up to 25 or 30 minutes a day, instead of the 20 minutes allocated,” said Gene Schmeling, owner of Afton Manufacturing. “I found myself getting aggravated as I saw more minutes ticking by.”

The manual punch card system also offered little flexibility for employees. For example, a worker putting in a 12-hour shift received the same two 10-minute breaks as his co-worker who was on the clock for just eight hours.

“With the punch clock, we had an accounting nightmare on our hands,” Schmeling said. “We were using a calculator to add up times on the cards. It was time-consuming and easy to make mistakes.”

Embracing the simplicity of RFID
Afton Manufacturing installed WaspTime time and attendance software, as well as a Wasp RFID time clock. Each employee was issued a credit card-sized card with an embedded RFID chip. Now, employees clock in and out by simply waving the card in front of the time clock.

“Since we are a small company, I didn’t think we could afford an automated time-tracking solution,” Schmeling said. “When someone recommended that I check out Wasp, I was surprised at how affordable and functional it was for a company our size.”

To make work easier and more flexible for everyone, Afton also altered its workday policies. The standard 10-minute breaks were eliminated, and employees were given a raise to make up for that time off. Employees then were given the ability to clock in and out for breaks as needed – as long as they worked their entire shift by the end of the day.

“We were losing up to 10 minutes a day per employee,” Schmeling said. “This may not sound like much until you multiply it by 14 people for 52 weeks a year.”

Saving a minimum of 300 hours added up to at least $6,000 in cost savings for Afton Manufacturing in the first year alone. At this rate, it took just two months for the WaspTime system to pay for itself. With the RFID time clock, employees also are less likely to punch in for a friend who is late to work. The elimination of buddy punching creates additional savings, Schmeling said.

The system also helped the companies in ways that are more difficult to quantify, Schmeling added.

“We used to have breaks scheduled at 10 a.m. and 2 p.m., and employees would stop whatever they were doing and head outside,” Schmeling said. “They might be 45 seconds away from finishing an operation on a part, but they would quit working. Now, they will finish what they are doing before taking a break. This can save several minutes that it would have taken to start the machine back up, in the middle of a cycle, after a break.”

Employees also feel more liberated, since they do not have to sneak around to take breaks, Schmeling said. They can simply wave their RFID card to punch in and out multiple times a day, ensuring they are paid for exactly the work they perform.

“If someone is having a tough day and wants to head outside to clear their mind, they can clock out whenever they want,” he said. “That stress relief helps with production, too.”